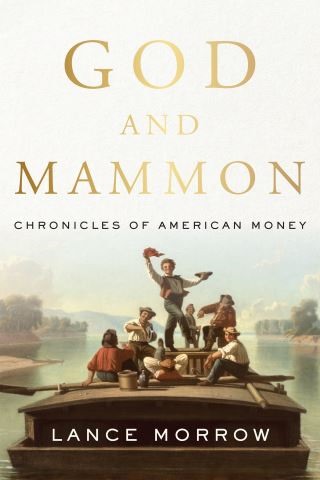 Award-winning essayist Lance Morrow writes about the partnership of God and Mammon in the New World—about the ways in which Americans have made money and lost money, and about how they have thought and obsessed about this peculiarly American subject. Fascinated by the tracings of theology in the ways of American money Morrow sees a reconciliation of God and Mammon in the working out of the American Dream.

This sharp-eyed essay reflects upon American money in a series of individual life stories, including his own. Morrow writes about what he calls “the emotions of money,” which he follows from the catastrophe of the Great Depression to the era of Bill Gates, Oprah Winfrey, and Donald Trump. He considers money’s dual character—functioning both as a hard, substantial reality and as a highly subjective force and shape-shifter, a sort of dream. Is money the root of all evil? Or is it the source of much good? Americans have struggled with the problem of how to square the country’s money and power with its aspiration to virtue.

Morrow pursues these themes as they unfold in the lives of Americans both famous and obscure: Here is Thomas Jefferson, the luminous Founder who died broke, his fortune in ruin, his estate and slaves at Monticello to be sold to pay his debts. Here are the Brown brothers of Providence, Rhode Island, members of the family that founded Brown University. John Brown was in the slave trade, while his brother Moses was an ardent abolitionist. With race in America a powerful subtheme throughout the book, Morrow considers Booker T. Washington, who, with a cunning that sometimes went unappreciated among his own people, recognized money as the key to full American citizenship. God and Mammon is a masterly weaving of America’s money myths, from the nation’s beginnings to the present.

Lance Morrow is an American essayist whose op-ed articles regularly appear in the Wall Street Journal. He is the Henry Grunwald Senior Fellow at the Ethics and Public Policy Center in Washington, DC. For many years, he was an essayist for TIME magazine. He is a winner of the National Magazine Award and the author of eight books, including Evil: An Investigation. Morrow lives in upstate New York with his wife, the author Susan Brind Morrow. He has two sons, James and Justin.